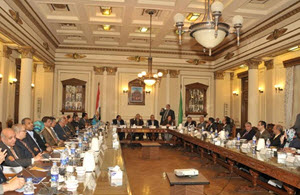 In a meeting headed by Prof. Dr. Gaber Nassar, Cairo University President, on Wednesday, March 30, 2016, Cairo University Council discussed the arrangements of holding second term exams for year 2015 – 2016. The arrangements included exam date, announcing exam schedules for students, and equipping exam halls. The council decided not changing exam date, which coincides with the holy month of Ramadan, to start in the last week of May according to the academic year plan determined before. The council stressed completing scheduled study hours at each faculty.

The University Council confirmed the importance of announcing exam schedules at faculties to conform with the schedule of holy Ramadan to end before breakfast time far enough. The scheduled time is from 9 a.m. to 1 p.m. or from 10 a.m. to 2 p.m. depending on the circumstances of every faculty.

The University Council decided to launch ،، Excellent Student Forum,, at Cairo University faculties to encompass students who are creative in international scientific publications, inventions, innovations, and other fields of creativity. The forum aims at boosting ambitions of youth, encouraging them to innovate, and providing them with financial and moral support.

Cairo University Council approved awarding scholarships to the soldiers injured in military operations at Sinai, who have medium-level qualifications. These scholarships are provided at Open Education Programs at the university. The council also approved exempting them from the condition of passing five years since obtaining their qualifications.

The council approved allowing Syrian students to attend exams until deciding on the matter of paying study fees scheduled for the academic year 2015 – 2016.