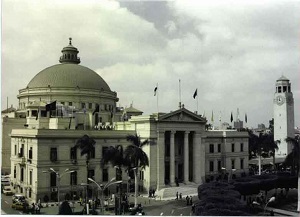 This was stated by Prof. Dr. Amr Salem, Faculty of Law Dean, Cairo University. Prof. Dr. Abdel-Moneim Zamzam, Faculty of Law Vice-Dean for Education and Student Affairs and Conference General Coordinator, pointed out that the conference is going to discuss several themes over two days. The themes of the conference revolve around contemporary security policy for facing crime development. Those themes are the role of data in security field, and security predictions of future criminal trajectories. In addition, other themes are on the characteristics of administrative police in societal legal security ،،comparative study among Egypt, Emirates and France,, , and protecting witnesses in corruption crimes. Moreover, the conference discusses prosecuting terrorists before International Criminal Court, International Criminal Law stance towards the bribery crime and combating it internationally, and expanding the scope of international criminal court specialties to reduce crime. Furthermore, themes of the conference also include recognizing the extent of economic motives influence on forming criminal behavior, and defendant rights in judiciary implementation of criminal justice at prosecution stage. The conference also touches upon the role of educational and religious institutions in preventing crimes, reducing them and facing misleading ideas, and citizen role in facing crime and confronting hatred discourse that incites discriminatory crimes.