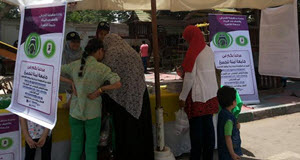 Anti-Harassment Unit – Cairo University held orientation day on the idea of its establishment, goals, policies and different activities. This was in the framework of the participation of the unit in Sham El-Nessim Day at Academic Staff Club – Cairo University.

A large group of the club pioneers showed clear interaction with the unit team work by filling in questionnaire applications, expressing their aptness to work among the unit coordinators.

Anti-Harassment Unit organized many training courses for students and coordinators from staff members and administrative security individuals. It also held orientation seminars at faculties and training camps for students inside and outside the university.