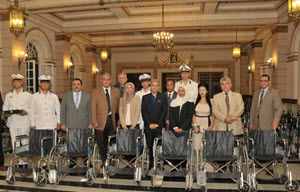 Cairo University received 150 wheel chairs from the Ministry of Interior to distribute among the university students with special needs, disability challengers and the clinics of Faculty of Physical Therapy - Cairo University as a gift from the Interior Ministry.