،،To Polish Rusty Hearts,, - It is an article copied from Gomhuria Newspaper and written by Gihan Abdel-Rahman about Cairo University. 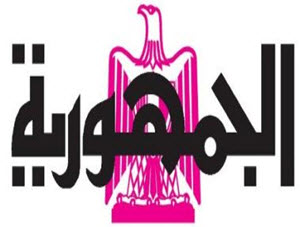 Weapons, drugs and violence were in a domestic coffee shop at a demotic, savage slum area encompassing human models whom age was callous to and regime ignored for decades, that they were more hardened against themselves rather than any regime. There were even massacres ignited for the least important reasons. The battle, this time, was on encouraging a football team. While the battle was at its peak, Khaled ElSawy, starring She and Da Vinci, a movie series, picked up a lute before it is smashed in the battle and started playing on it and singing. Minutes passed and the sound of playing and voice of singing became louder that the battle voices. All are singing and positive energy is apparent on their faces. They interacted with singing as if they are people whom spirits were replaced, in few seconds, with another spirits belonging to the human world. Despite their shabby clothes and tough circumstances were the same, something changed as soon as they interacted with music and singing. This may be what Imam Ali ibn Abi Talib, may Allah be pleased with him and give him pleasure, meant by saying ،،Hearts are fatigued just as bodies are. Therefore, procure for them choice bits of wisdom,, . This may also be stated by the science of energy, human development or any new science searching in human self and how it is influenced by singing and music. For sure, high art is the best polisher of souls and this does not contradict religion, values and sublime human principles.

Those who are interested in following up the student activities of Egyptian Universities, their revival and the withdrawal of violence and terrorism in them should refer to the enlightening cultural movement. This movement started to shine in the most ancient University in Egypt; Cairo University, led by Prof. Dr. Gaber Gad Nassar who gives us every day a new lesson in the art of leadership and management and interacting with students by various means. We may disagree or agree with him in many decisions he takes, but Cairo University restored, through out two running years, successful, remarkable cultural and artistic seasons. We witnessed varied cultural, religious and artistic seminars that address all categories and ideas. We witnessed inviting students to attend successful theatrical and singing shows of senior artists who volunteered fees, and all concerts were for free to students, bearing in mind that those concerts were held at private universities with very high prices. This was intended for fighting terrorism and extremist ideology. Therefore, soul returned to body after leaving it intentionally for thick-witted political reasons that were devoted for one political party whatever consequences are.

The last idea that Cairo University called for and carried out was Sahoor (pre-dawn meal at Ramadan) party. This took place for the first time in the history of governmental universities. The party accommodated more than 20, 000 persons. It was an audacious, amazing and positive idea that shortened distances between students and University Administration as well as between students and common sense including values of goodwill, tolerance and sublimity.

The enthusiastic, cheerful and sincere tone with which Dr. Gaber talked inviting me to attend Sahoor Party, makes me easily touch the bitter, pained tone with which he talked at TV channels to refute the accusations he received after the party. The man said that the university wished to organize the party to cheer-up students and their relatives, and what was said that the university is involved in using political money is incorrect, and he is not the one to allow this to happen. The issue was merely social student activity which was far from any political sense.

Like Khaled Elsawy who polished tortured spirits with a simple song and easily polished their rusty hearts at a simple slum area through aware sense mastered by the author, I think Gaber Nassar did the same thing at Cairo University. He also masters tools that others miss at all the locations of management, especially that the targeted audience this time is students who are coevals of five-year large political changes since 2011 until now. They are the most demanding category for spirit return so that their hearts do not rust.