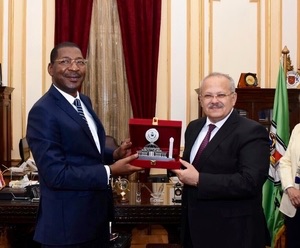 Cairo University President opened ،،Awareness Week,, , which activities are to continue until September 22, 2016, saying: ،،Today is really an important day in Cairo University lifetime as well as the lifetime of every new student who joins Cairo University team,, . He pointed out that ،،Cairo University is not only a place for education, but it is also a place for culture, mind and emotion development, respecting the other and difference of opinion as well. ,,

Cairo University President added that ،،Cairo University is a place of enlightenment which should preoccupy minds and hearts, thus, it considers all the aspects regarding its students,, . He pointed out that ،،the university develops  new exams systems such as ،،Bubble Sheet,, which corrects exams electronically and evaluate students fairly. ,,

Nassar addressed new students saying ،،Demand your rights in good education, in culture and art,, pointing out ،،we should respect the right of disagreeing among us for it is a cosmic tradition. ,,

Cairo University Vice-President for Community Service and Environment Development Said Daw said that ،،Awareness Week is a new tradition that is organized for the first time.  It aims at introducing Cairo University to new students, their university, its history, facilities, social and service projects and important places at the university. ,,

Student Activities are going to be held at the university playground on Thursday, September 22, 2016, such as, pentagon football match between students and academic staff members and artistic competitions with previously enrolled students participating.