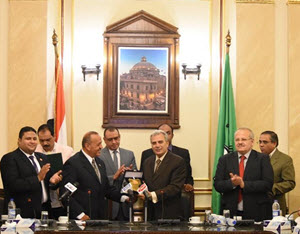 Cairo University and Egyptian Center for Transparency and Countering Corruption signed a cooperation protocol for experience exchange in countering corruption within the framework of national program for countering corruption. The protocol aims at identifying the causes of corruption and working on the development of programs that contribute to limiting it and investing the available potentials of both the university and the center. This is intended for making the required change by experiences exchange in addition to training programs in Public Finance protection, the prevention of all forms of corruption and the activation of societal participation in this field.

Cairo University President said during protocol signature that،، the state is serious in dealing with this crucial file by taking decisive measures especially for corruption prevention. ,, He added that ،،Egypt achieved the place 65 in transparency indicator at the global level instead of the place 114 which is a great transition in countering corruption. ,,

Cairo University President pointed out that ،،institutional corruption is the most dangerous type of corruption and integration between regulatory agencies and executive ones of the state is crucial. ,, He said that ،،Egypt can be let out of its crises despite difficult economic circumstances which it passes through. ,, He added that ،،national projects developed by the state in the current period aim at raising up the country, serving citizens and giving hope for future. ,,

Major General Hossam Shawky said that ،،Cairo University is the first Egyptian University to show readiness for cooperation and experience exchange with Egyptian Center for Transparency and Countering Corruption. ,, He pointed out that ،،the university has a unique experience in this field, hence, it is a model for all other institutions. ,, The Major General added that ،،the state took positive steps in corruption countering field and protection and corruption prevention measures should be taken by utilizing  the culture of the society that rejects corruption especially youth and others. ,,

The protocol signed between Cairo University and Egyptian Center for Transparency and Countering Corruption includes the organization of training courses in countering corruption in participation with academic staff members, employees and students. The protocol also includes the preparation of awareness campaigns in the academic society and the surrounding environment. Cultural seminars and workshops among academic society sides are incorporated in the protocol aiming at making change for protecting Public Finance. The protocol also develops mechanisms for the approval of functional cycling especially in public positions and the guarantee of their alternation at different places to eliminate corruption. The protocol also covers the provision of human element; lecturers and experts, necessary for accomplishing the project.