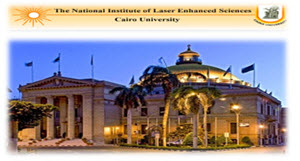 A group of Egyptian and foreign professors headed by the Egyptian scientist Mostafa A. El-Sayed participate in the conference.