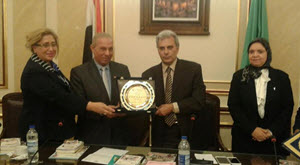 Cairo University President Gaber Nassar received a delegation of 25 female pioneers of The Future Pioneering Females Movement. The meeting was attended by a Professor of Political Science and Movement Sponsor Gamal Zahran, the Movement Coordinator- General Mona Abu-Hashima, Media Woman Bothaina Kamel, Media Woman and Head of Supreme Committee for Parliamentary Affairs of The Egyptian Organization for Human Rights (EOHR) Karima Seyam and some figures of the movement. Cairo University President Gaber Nassar was awarded a badge of honor and certificate of merit by the movement for the role he played in combating ideas of extremism and discrimination among Egyptians by cancelling the religion cell in Cairo University dealing papers.

Dr. Gamal Zahran said, during the meeting, that ،،Dr. Gaber Nassar managed during the period of his Presidency for Cairo University to uplift the university and took firm measures in fixing its pillars. He restored the cultural and enlightening role of the university and combated extremism by eliminating the structure of extremism. ,,

Cairo University President said that ،،Education development, activities among students and communicating with society are crucial. ,, He reviewed the most eminent achievements made for Cairo University in the recent period, pointing out that ،،they are the outcome of the cooperation between him and the university team as one whole. ,, Dr. Gaber Nassar added that ،،Cairo University is keen on cooperating with society,, He referred to its role towards society and its commitments to developing education, uplifting scientific research and expanding its substructure.

Cairo University President said, concerning the problem of Cairo University Children Hospital (El Mounira), that ،،Patient children frequent it from all over Egypt, but treatment in this hospital is highly costing. More than 1000 children are received daily but not more than 450 beds can be accommodated. ,, He added ،،a neighboring land is being expanded for increasing its capacity to 650 beds. ,,