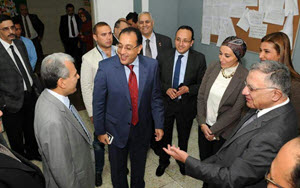 The Minister of Housing, Utilities & Urban Development Mustafa Madbouly and Cairo University President Gaber Nassar inspected Abu El-Rish Children Hospital. They were accompanied in their tour by the Dean of Kasr Al-Ainy Medical School Fathy Khodeir and the Director of Abu El-Rish Children Hospital Ranya Hegazy. A meeting was held between the Minister of Housing and Cairo University President at the hospital headquarter with Kasr Al-Ainy Medical School Dean, the Hospital Director and some Professors of Medicine attending.

The Minister of Housing Mustafa Madbouly said ،،the Ministry is ready to establish two specialized pediatric hospitals for serving Upper Egypt, needing designs and studies only. ,, He added ،،the procedures will end within a year. ,, The Minister announced the agreement of establishing two new hospitals for treating children at Upper Egypt along the lines of Abu El-Rish Children Hospital. ,, He pointed out،، the first hospital will be headquartered in Assiut Governorate and the second one will be headquartered in Beni Suef Governorate. ,,

Cairo University President Gaber Nassar expressed his gratitude to the Minister of Housing for his initiative. He made a presentation on the potentials and expansions of the hospital which they will start carrying it out. He said ،،a Committee of Engineering will be composed of members from Cairo University and the University existing in the governorate where a land is chosen as a location for the hospital. A plan for the administration, designs and cooperation protocol of operating the hospital will be agreed upon. ,,

Prof. Dr. Gaber Nassar said ،،each hospital will accommodate 250 beds. ,, He pointed out ،،the first hospital will be affiliated to Assiut University, whereas the second one which is to be located at Beni Suef Governorate will be affiliated to Cairo University in partnership with Beni Suef University. ,, Nassar added that،،it is scheduled to finish the procedures of the two hospitals establishment within a year. ,,

Prof. Dr. Gaber Nassar announced Cairo University approval of purchasing Magnetic resonance imaging (MRI) scanners of high quality for Abu El-Rish Children Hospital costing more than EGP 10, 000, 000. He said ،،Abu El-Rish Hospital owns the most modern medical and technical devices that are based on global medical specifications. The only problem of this hospital is its limited placed of receiving treatment among thousands of children as the hospital daily receives hundreds of children from different governorates. ,,