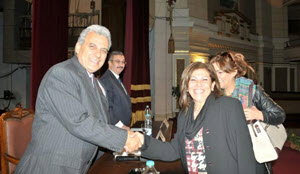 Nassar added that ،،after releasing the exchange rate and pound floating, Cairo University increases the financial value of the international publication awards among staff members and duplicates the financial contribution of the participation of staff members in international scientific conferences.,, He pointed out that ،،Cairo University boosts scientific research without borders.,, Cairo University President said that ،،the university got rid of great difficulties that were being witnessed by everybody.,, He pointed out that ،،this matter passed a short time ago as the university was severely disturbed and was in an unprecedented case of violence and shortage of financial resources and it is obvious that the university have not achieved progress except by financial and administrative reform based on transparency, justice and fairness.,,