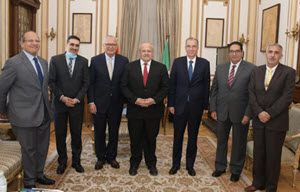 Cairo University Council reviewed, in its meeting on December 26, 2016, first term exams progress at faculties starting on December 25. The council urged following up exams progress by Deans and Vice-Deans, solving all problems of exams, providing all means of comfort for students during performing exams and the availability of professors on the days of the subjects they teach.  The council also urged that staff members do not travel abroad during the period of exams and the immediacy of answer sheets correction and exams control after the end of each exam of every subject. The recycling of students answer sheets among professors, correcting them, revising each question alone and making sure that the marks given to students are accurately monitored are also noted to be important by the council.

The council decided the non-prevention of any student who did not pay study fees from performing their exams, provided that they pay them in the second term. The cases of the students who are incapable of paying study fees will be considered for help.

Cairo University Council reviewed the cultural season activities that took place during the first term including cultural seminars, scientific lectures, artistic activities, theatrical shows and concerts. The council commended student interest in those activities and their participation in different activities. The University Council reviewed ،،Iqraa,, Competition carried out by the university for its students in B. A, B. Sc. and post-graduates with EGP 100, 000 awards. The council called for converting it into an institution aimed at disseminating culture among students and encouraging them to read, analyze and criticize. The council approved the proposal of carrying out a section in the competition for teaching staff members at the level of Egyptian Universities and presenting serious studies in this respect with EGP 300, 000 awards.

Cairo University Council discussed ،،Dowar El-Qiraah,, Project for the university students including nearly 2000 titles of writings as a first stage for great books and writers in cooperation with some publishing houses. The project is aimed at spreading reading among students, providing writings and books of high narrative and literary value to be available during the second term. A list of those books and writings will be presented on the university website, their system will be determined and a place will be allocated for borrowing them.

The university council approved some appointments, promotions and granting of scientific titles to a group of teaching staff members at different faculties and institutes of Cairo University.