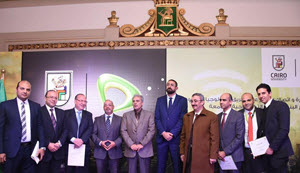 Cairo University President said that ،،this project is one of the largest projects of substructure and the university networking linkage in the last decade.,, He pointed out that،،the two stages of the project include installing and connecting more than 331 wireless communications to cover the university campus, student halls and buildings in all the faculties inside the campus with wireless communication networks that allows free internet service to all students, employees and teaching staff members inside the buildings and during roaming inside the university campus.,, He said ،،the project includes connecting Faculty of Specific Education with Faculty of Kindergarten, that are located outside the university campus, with the main information network at the campus to facilitate benefitting from free internet services to both faculties.,, He added ،،connecting these two faculties with the main information network allows benefitting from all electronic and educational services of the university and minimizing extra expenses that were paid by these faculties to get internet services and other electronic services.,,

The Director of Cairo University Center for Electronic and Cognitive Services Mahmoud Shoman said that ،،the first and second stages of the project include also carrying out and operating the first substructure of information networks at the university hostel since its establishment.,, He said ،،this substructure includes 1, 118 meters of high-speed optical fibers to connect all the buildings of the university hostel with the main information network of the university so that Cairo University Hostel becomes the first hostel in Egypt where high-speed free internet services are allowed to students via optical fiber networks at student rooms and studying halls at the hostel buildings.,,

Cairo University Secretary-General Yousry Ibrahim said that ،،the optical fibers cables at the university hostel provides nearly 440 communication Kernels so that the new substructure can represent a real transfer that is capable of boosting student services development for many future decades including the support of new educational applications and services such as e-learning and high-quality broadcasting of lectures and activities presented by the university.,,

Cairo University Secretary-General added that ،،the third and fourth stages of Cairo University Information Networks Substructure Development Project are currently being carried out.,, He said ،،the third and fourth stages include carrying out and developing the information networks substructure at the medical sector faculties campus and Sheikh Zayed University campus as well as Cairo University hospitals.,, He said ،،Cairo University is keen on developing electronic services presented to citizens including the transfer of X-ray images and the development and linkage of medical records of patients between different hospitals.,, He added that ،،these two stages are considered crucial especially electronic services development in the medical sector.,, He said that ،،it is expected that the project will be finished in late March 2018 according to the project time plan.,,