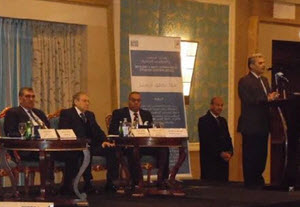 The extensive seminar of Research and Commercial Studies Center, Cairo University, on ،،the confrontation strategies for current changes in the Egyptian business environment,, is opened by the Minister of General Business Sector Ashraf Al-Sharqawy and Cairo University President Gaber Nassar.

The Minister of General Business Sector Ashraf Al-Sharqawy said, during the seminar opening, that ،،the ministry works on analyzing current investments in general business sector companies and financing resources so as to reach investment structures as a response to current economic changes.,, He pointed out that ،،the ministry studies employment restructuring in companies to redistribute them on the jobs that suffers shortage in required efficiencies and achieve balance between technical and non-technical employment.,, The minister added that ،،there are many themes of developing companies in general business sector that we work on for treating the influence of recent economic changes on those companies.,,

The minister urged benefitting from the experiences of universities professors in developing a practical vision for facing the influence of recent economic changes on business organizations and analyzing the implications resulted from them in the Egyptian business environment.

The minister commended the role of Research and Commercial Studies Center – Cairo University in the issuance of objective studies on strategic alternatives for dealing with current economic changes.

Cairo University President Gaber Nassar said that ،،the recent economic decisions were necessary despite their difficulty.,, He pointed out that ،،Egypt has the courage of taking important decisions that are to found new future for Egypt.,,

Nassar added that ،،we should face the influence of recent decisions with science so as to treat negative effects.,, He pointed out that ،،Egypt struggles for a better future for citizens and state institutions.,,

Nassar said that ،،universities and Cairo University in their heart should play an affective role in helping the state and decision makers and supporting them with studies that help them to achieve sought goals.,,

Cairo University President tackled the keenness of Cairo University on helping the development of economic and service sectors in the state through research units and centers including heir human cadres.

Faculty of Commerce Dean Ehab Abou-Eish referred to the importance of discussing implications on business and governmental organizations, because of recent economic decisions, by objective analysis and alternatives extraction.

The Director of Research and Commercial Studies Center Abdel-Aziz Hashem said that ،،the seminar of the confrontation strategies for current changes in the Egyptian business environment tackles the economic dimensions of the current business environment in Egypt in the light of economic government program and the confrontation of its influence on business sector in Egypt.,, The director pointed out ،،the seminar recommendations and results will be submitted to the authorities, decision makers and business sectors institutions to benefit from them in development and the confrontation of the problems they suffer from.,,