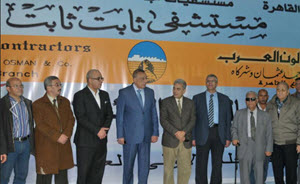 Cairo University President Gaber Nassar and Giza Governor Kamal El-Dally visited the project location of the Endemic Diseases Institute and Hospital ،،Thabit Thabit,, project, affiliated to Cairo University and located in Al-Haram Street. They were accompanied, during the visit, by Cairo University Vice-President for Postgraduate Studies and Research Affairs Amr Adly, Faculty of Medicine Dean Fathy Khodeir, Cairo University Secretary-General Yousry Ibrahim and some professors of Faculty of Medicine. Cairo University President and Giza Governor inspected the experimental operation, preparation works, finishing touches of the hospital first stage and work progress for carrying out this stage completely as a preparation for the hospital inauguration. This stage includes a building that accommodates 120 beds, outpatient clinics, intensive care department, X-ray rooms, telescopes, sonar, laboratories, and blood bank. Nassar urged completing all the equipment requirements of this stage to start providing citizens with treatment services for free so that patients get benefitted from them before the next stage. It is planned that all the project establishments and preparations will be finished within two years so that Endemic Diseases and Epidemics Hospital – Cairo University becomes the first research and therapeutic institute in Egypt and the Middle East that provides high-level health service in the field of combating, diagnosing and treating endemic diseases.

،،Thabiit Thabit Hospital is a medical edifice in Cairo that has a distinctive location. It encompasses modern technologies that enable it to offer a distinctive medical services that Giza Governorate citizens benefit from.,, , said the Giza Governor Kamal El-Dally. He pointed out that ،،Giza Governorate is proud of this vital medical edifice. We follow-up with Cairo University the completion of this crucial work that adds to health system in Egypt.,,

،، Thabit Thabit Hospital accommodates 350 beds, 4 operation rooms, 10 outpatient clinics, and integrated diagnosis and research departments on two stages,, , said Cairo University President Gaber Nassar. He pointed out that ،،the hospital is composed of 4 buildings of 12, 000 meters per floor. The buildings encompass the departments of contagious, cerebral and viral fevers, emergency reception, operation and surgery rooms, outpatient clinics and laboratories. The project total cost is nearly EGP 600, 000, 000,. He added that ،،Cairo University nearly injected EGP 250, 000, 000 into the first stage with all its medical equipment necessary for operation .,, ،،the national service system at the armed forces contributed to the preparation of laboratories and X-ray rooms that are the hugest in endemic diseases treatment. Giza Governorate also contributed to removing the obstacles that face carrying out the project.,, said Nassar.

The idea of establishing this hospital dates back to nearly 76 years due to the will of a business man, with a Syrian origin and has the Italian nationality, called Thabit Georgy who recommended the establishment of a hospital for treating endemic diseases on a land of 7, 300 m2 at Al-Haram main street and submitting it to the state.  The lawsuit between the government and the inheritors ended by the execution of his will and the issuance of a ministerial decree in 1990 that urges the transfer of the succession guardianship to Faculty of Medicine. The project started in 1997 and the establishment was suspended again in 2002. The two-time suspensions were due to the shortage of financial accreditation until the project was revived by Cairo University.