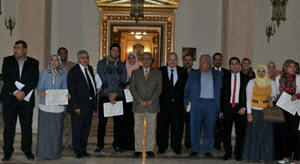 Cairo University President witnesses the celebration of distributing the preparation competition awards of the curriculum, entitled ،،Common Human Moral Values among Peoples,, , among the winning work teams of the first three places. The three awards are of EGP 225, 000 value; EGP 100, 000 for the first place, EGP 75, 000 for the second place and EGP 50, 000 for the third place.

Cairo University earlier launched the competition among the university professors and specialists for preparing a book on common human moral values among peoples.  The authors of the curriculum followed guiding specifications approved by Cairo University Deans Council and the committee formed for determining the curriculum specifications. This curriculum is an academic requirement for graduation from all the faculties and institutes of Cairo University. Students perform only one exam in this subject throughout their study at their faculties. The curriculum is aimed at providing students with the skills and trends of interacting with human heritage, increasing awareness of human rights, enhancing positive outlook towards the Other and reaching a critical understanding for their cultural identities.

،،The curriculum contains a group of themes including the concept of morals and human values such as human communication, dignity and rights. The book will be available for students on compact disks (CDs) and as print version at faculty libraries.,, , said Cairo University Vice-President for Education and Students Affairs Mohamed Osman El-Khosht.