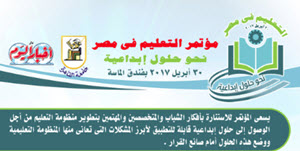 The scientific committee for the conference of ،،Education in Egypt towards Creative Solutions,, starts on March 30, 2017. The conference is organized by Cairo University and Akhbar Elyom in receiving solutions for ten suggested problematic issues in pre-university and academic education.

Solutions are being received from all society categories, experts and those who are concerned with educational process until Thursday, April 20, 2017, through this e-mail: edu.innovation@cu.edu.eg

Cairo University allocated EGP 500, 000 for awards for the best suggested applicable solutions of EGP 50, 000 for every problem. The scientific committee for the conference determined the problems in the pre-university and academic education. The pre-university education includes the future of general secondary stage, the development of exams systems, facing private lessons, the density crisis at schools, school books, incorporating knowledge bank in educational process and the development of technical education and linking it to industry.

A committee of senior professors from different universities is formed to evaluate the suggested solutions and choose the most applicable of them to review it in front of decision makers before holding the conference at Al Masa Hotel on April 30, 2017.

The opportunity is available for winners to present their solutions to society through the conference which is attended by the Minister of Education, the Minister of Higher Education and Scientific Research, concerned ministers, elite of experts in the education field and representatives of students and their parents.

The committee decided that solutions are to be presented in not more than six Microsoft Word pages which include the idea, implementation mechanisms and their influence on the system and timetable of implementation.