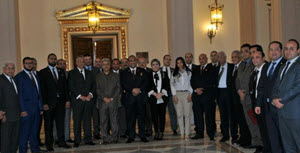 Cairo University and Bayt El Khebra Company Group signs a cooperation protocol for training Cairo University students in entrepreneurship. The protocol is aimed at the development of training and skills for labor market. The work of this cooperation continues for four academic years over stages that start at Faculty of Commerce and other faculties throughout the signed protocol period. Lectures and practical training for students are held and supervised by a group of expert university professors to qualify some youth for employment at banks and companies.

Cairo University Vice-President for Community Service and Environmental Development Affairs Saeed Daw said that ،،the protocol is aimed at supporting educational system by providing students with training opportunities and labor skills through holding partnerships with civil community and some companies and banks. The protocol is also aimed at providing students with job opportunities after preparing them adequately in the entrepreneurship program presented by Community Service and Environmental Development Sector, Cairo University.,, Prof. Dr. Saeed Daw pointed out that ،،Cairo University has similar partnerships through the entrepreneurship program that is aimed at developing student skills to facilitate engaging them in labor market.,,