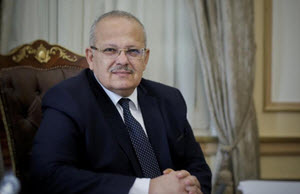 Cairo University President Gaber Nassar signs a construction contract during his visit to Japan on Wednesday, April 19, 2017, for establishing New Abu Al Reesh Hospital on a plot donated by Arab African International Bank. The contract was signed at the Egyptian Embassy in Tokyo. The signature of the construction contract was attended by the Egyptian ambassador in Japan Ismail Khairat, Cairo University delegation, a representative of Japan International Cooperation Agency (JICA), the Japanese project advisor, Nihon Sakaki Company as architecture advisor, Pinco International Corporation as an advisor for medical devices, and the Japanese companies that were chosen for carrying out the new hospital construction project. New Abu Al Reesh Hospital will be funded by Japan through charitable contribution worth $ 18,000,000. The hospital is composed of 7 floors on 500 m area behind the old building. It will be dedicated for outpatient clinics to reduce the over density at the old building by allowing some beds and offering medical services according to new concepts.

Cairo University is represented in Japan by a delegation headed by Prof. Dr. Gaber Nassar. The delegation is composed by Faculty of Medicine Dean, at Cairo University, Fathy Khodeir and Cairo University Engineering Advisor Medhat Al-Shazly. Agreements were negotiated with Nihon Sakaki Company, the Japanese project advisor, over the last ten days of the contract signature. Dai Nippon Japanese Construction Corporation, which has been having a bureau at Egypt for 30 years, is selected as an architect and construction contractor for the project by tender according to the Japanese law. It is scheduled that the project is carried out over 17 months starting from May 15, 2017, and the corporation will guarantee full establishment and finishing. ITOCHU Corporation for importing medical devices, 89 types of different devices, is also selected for the hospital.

Prof. Dr. Gaber Nassar congratulates Egyptian people in the name of Cairo University for this achievement that will represent a qualitative addition for Cairo University hospitals. Nassar said that ،،we have comprehensive outpatient clinics children hospital to provide children from all over Egypt with efficient therapeutic services by expert professors of Kasr Al-Aini Faculty of Medicine of recognized standing in the world.,,

Cairo University President gives, in the name of Cairo University, thanks to the Egyptian Ambassador in Japan Ismail Khairat, Egyptian members of the embassy, the Japanese project advisor, Egyptian scientist abroad and Cairo University Faculty of Engineering graduate Ehab Al-Wagih for the services they offered to Cairo University delegation. Nassar commends JICA Institution, the representative of Japanese Government that finances the project, and Arab African International Bank that donated the plot.