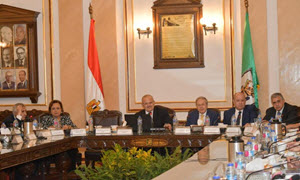 The achievements reviewed are regarding educational process, scientific research, sub-structure development, financial and administrative reformations, community service and extremism confrontation. The council commends Cairo University efforts in developing the different fields that the academic component includes. Cairo University President Gaber Nassar said that ،،The achievements that were realized during the previous period are an institutional work that faculties deans, professors, employees, students and community participated in as well as the state support. This has a positive influence on society and students.,, Nassar enunciates his support of the next university president who will be chosen from one of the candidates. Nassar pointed out that ،،Cairo University is a great name that should be protected. The efforts of all professors should be united for preserving Cairo University position.,,