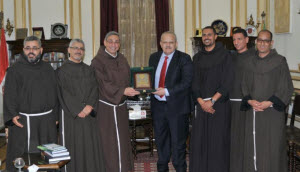 The Catholic Franciscan delegation presents congratulations to Elkhosht for his presidency of Cairo University. A friendly talk is exchanged on art and cinema.

Elkhosht said that ،،Values of tolerance, peace and love among peoples as well as communication between religions for disseminating joint human values and unlearning intolerance are very important.,, He acclaims the role of Cinema Catholic Cultural Center. Elkhosht pointed out that ،،There are two directions of determining the role of art. Art is either a reflection of society or it leads society for change.,, He mentions ،،I am brought up with art that has message especially in cinema field.,,