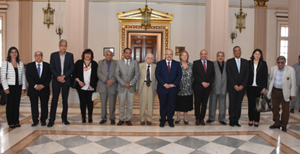 Cairo University President Mohamed Osman Elkhosht announces preliminary principles of the university document for culture and enlightenment during a press conference after the first meeting of Cairo University Council for Culture and Enlightenment ended on Wednesday, August 16, 2017. The council is attended by some culture, media and public figures.

The preliminary suggestions of the document include founding Arab stream resistant to reactionary and extremist ideas, benefitting from global enlightenment experiments, and working on changing the system of values governing behavior and character change. The document also includes providing university libraries with information resources to cope with global libraries. It also involves expanding the vision and domain of student activity so that students reach values of coexistence and enlightenment. Student activities are not meant for just seminar or ceremony, but also for cultural and enlightening thrust for real awareness of the national items of the state provided that this extends to include student habilitation.

The preliminary principles of the document state that Cairo University is a civil and rational university, and freedom is one of its components. Right of disagreement, variety of creative thought, avoiding racial, social and religious discrimination, opening to global streams, stressing the enlightened identity of Egypt and that Cairo University is a partner in forming this identity are also principles of the university document. The preliminary principles emphasize the values of coexistence, accepting the Other with determining the concept of enlightenment as a rational practice and daring to use rational thinking with establishing an ideological system against backward reactionary ideological system.

Elkhosht said that ،،The document stresses discovering student talents and opening tracks for them in different cultural fields.,, He pointed out that ،،Cairo University is for all Egyptians and the main principles of its document are the right of disagreement, ideological variety, freedom, and equality among students.,,

Elkhosht illustrated that ،،Editorial committee will be formed from the members of Culture and Enlightenment Council to edit preliminary suggestions and recommendations to present them in front of the council in the coming meeting as a preparation for Cairo University Document for Culture and Enlightenment.,, He pointed out that ،،The ideas suggested in the first meeting are for discussion and are to be approved after preparing the final form.,,