Elkhosht in Ceremony of Egyptian Day for Education: ،I hope civil society will connect between Egyptian family and government, 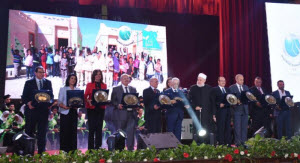 The ceremony of Egyptian Day for Education is held at Cairo University on September 18, 2017. It is attended by the Chairperson of Misr El Kheir Board of Trustees, and ministers of education, military production, and immigration.

Cairo University President Mohamed Osman Elkhosht said, in the ceremony, that ،،Education should be based on different thinking methodologies, especially that current students will not benefit homeland as long as they memorize information only. The slogan of Cairo University, therefore, is transformation into a third-generation university; scientific research for serving development and accessing luxury. If science does not benefit people, it is useless science. We have thousands of research papers left with no use; such research papers are merely mean of enhancing the university global ranking. All projects should serve national issues. Closed education system causes terrorism because it depends on memorization without comprehension. European universities qualify students by nurturing their skills, whereas universities in the Orient are graduating students who study for information,,   Elkhosht added that ،،There is difference between science industry and science consumption.,, He pointed out that ،،Newton theory was taught to Egyptians without illustration of scientific heritage. They just told us that he discovered law of gravity when he was sleeping under a tree.,,

Elkhosht in Ceremony of Egyptian Day for Education: ،I hope civil society will connect between Egyptian family and government, - Cairo University