Elkhosht: ،We Managed to Decentralize 45% of Cairo University Administration, 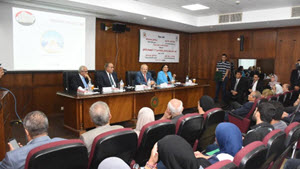 A seminar is organized by Faculty of Economic and Political Science – Cairo University (FEPS – CU) on ،، General Census of Population, Housing, and Facilities for 2017: Methodologies and Results.,, The seminar is attended by the President of Central Agency For Public Mobilization and Statistics (CAPMAS) Abu-Bakr Elguindi, Acting Dean of FEPS – CU Magda Saleh, Professor of Statistics at FEPS – CU and Census General Supervisor Hussein Abdel-Aziz, and a group of academic staff members and students at the faculty.

Elkhosht added ،،We seek transforming Cairo University into electronic one because Egypt needs not only electronic administration but also smart one as decision making needs clear and certain information.,, He pointed out that ،،Societal an decision making awareness of the census importance should be found to reach accurate data.,,

CAPMAS President Abu-Bakr Elguindi said that ،، Census of Egypt population for 2017 passed through three stages to calculate population, housing, and facilities. Electronic census allowed a number of advantages to the apparatus as human resources numbers are reduced from 125, 000 to 40, 000, in addition to data quality and assurance, reaching accurate results, the ability to face problems, and speedy accessibility of data.,,

Elguindi added that ،،Employees of CAPMAS are completely trained as 40, 000 employees at governorates training headquarters are trained by 500 trainers.,,