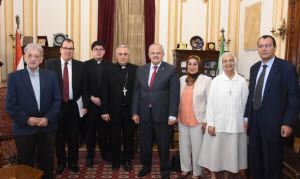 Elkhosht said, during the meeting, that ،،Sufism movement is one of the most important trends that work as meeting points between religions because it has common features of all religions.,, He pointed out that ،،Al-Azhar in Egypt plays important role in interreligious dialog which is held with Vatican.,, He added that ،،Relation between Egypt and Vatican should follow several trends in addition to religious trend.,,

Elkhosht said ،،I believe in the importance of new religious discourse based on common interreligious values and philosophies.,, He refers to his book ،،Towards Establishing a New Religious Age.,, The book focuses on the values of civility, rationality, coexistence, acceptance of others, and global peace. Alkhosht states the importance of cooperating together to combat terrorism, extremism, violence, and discrimination in general.

The Vatican ambassador in Cairo Archbishop Bruno Musarò said ،،I am really interested in the dialog among various cultures, along with my personal love of Egypt as it represented a model for coexistence among different religions and cultures.,, He added ،،I hope the relation between Egypt and the Vatican follows several trends represented in intercultural and intercivilizational encounter through universities and cultural institutions.,,

The Vatican ambassadors pointed out ،،We have two ministries; the first is concerned with interreligious dialog and the second is concerned with intercultural dialog.,, He expresses his hope in finding a mechanism for cooperation between Cairo University and the Vatican universities in fields of scientific exchange and joint research. He added that ،،Pope of the Vatican is interested in encouraging Catholic Christians all over the world by visiting religious landmarks in Egypt most important of which is Holy Family path.,,