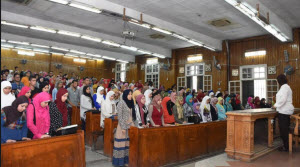 Cairo University faculties witness, on Sunday, two minutes silence to mourn the souls of police martyrs who are victims to the confrontation with some terrorists on Friday, at Al-Bahariya Oasis.

Cairo University earlier condemned the terrorist attack in a statement and announced its solidarity and support for men of army and police and all foundations of Egyptian state to terminate terrorism.

Cairo University President Mohamed Osman Elkhosht said that ،،These terrorist attacks will not discourage Egyptian people of combating black terrorism and standing shoulder-to-shoulder with men of army and police to eradicate terrorism from its roots.,, Prof. Dr. Mohamed Osman Elkhosht urges Cairo University faculties to stand in two minutes silence to mourn the souls of martyrs in lectures this week.