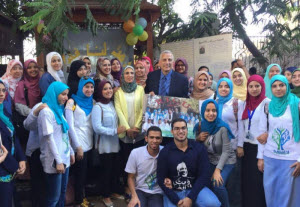 Faculty of Physical Therapy Cairo University students gathered for a demonstration of love at faculty yard, on Sunday, October 29, 2017, to honor Faculty Dean Alaa Balbaa and present him bouquets on the occasion of the end of his official deanship period. Balbaa was Faculty of Physical Therapy Dean for two consecutive periods and he is now Acting Dean for the faculty until the appointment of new dean according to the decree of Cairo University President. Faculty students were keen on holding a celebration in honor of Prof. Dr. Alaa Balbaa under the slogan of ،،Forever will be pride of the faculty,, as appreciation of the achievements he presented to the faculty and physical therapy career throughout his deanship period.

Prof. Dr. Alaa Balbaa works as orthopedic physical therapy specialist and professor at Cairo University. He became the faculty dean by vote for two consecutive periods since 2011. His most prominent achievement is enforcing republican decree amending Universities Organizing Law by increasing study years number at all governmental and private faculties of physical therapy to become five years instead of four plus internship year. Balbaa established a committee for Physical Therapy Sector at Supreme Council of Universities for the first time in the history of physical therapy. Faculty of Physical Therapy Cairo University obtained international accreditation from World Confederation for Physical Therapy, in his deanship period, to become the first Egyptian faculty to get international accreditation. Prof. Dr. Alaa Balbaa adopted the national project (No Disability). Faculty of Physical Therapy is locally accredited by National Authority for Quality Assurance and Accreditation of Education (NAQAAE) in his deanship period.