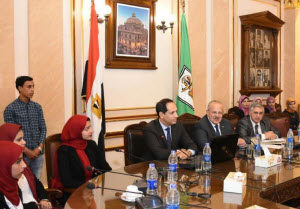 Prof. Dr. Mohamed Osman Elkhosht said, during the opening of first salon session, that ،،Cultural salon is one of the outcomes of Cairo University Document for Culture and Enlightenment which is drafted and announced in October 2017.,, The document supports the university vision as a patriotic university that is open to global trends and believes in interdisciplinary specializations, academic freedom, and student freedom without partisan work.

Elkhosht added that ،،Cairo University cultural salon is meant for students and is based on the idea of dialog. It relies on 4 generations; elderly generation, middle-aged generation, youth generation, and student generation. It is organized within the framework of Cairo University specific strategy for rational orientation support.,, He pointed out that ،،The main topic around which the discussion of first salon session revolves is entitled ،،Hope Offering,, which means looking forward, seeking target, and working on achieving it.,,

The media professional Ahmed Salem said in his dialog with Cairo University students that ،،Cultural salon and dialog are important for coming generations who coincide many hindrances and need not only theoretical dialogs but dialogs accompanied with experiences, models, and experiments.,, Salem pointed out that the offering of hope and optimism idea is the bedrock of success way, creative idea implementation, and youth work on developing their potentials, skills, and talents.,,

Salem said ،،I dream of implementing initiative at each faculty to confront unbridled lust of all Egyptians for receiving B.Sc. or B.A. only without working on developing ideas and skills.,, He added ،،You can. Other people cannot and their utmost hope is to wait for a plane to provide them with assistance. Think of a country where 104 people trying to maintain their livelihood. We should innovate new ideas and offer hope to ourselves.,,

Salem added ،،Work on your talent and do not dismiss hope because you will reach what you want. All current writers got famous from social media. Forget about the societal outlook. No one will recognize you except when you succeed. Recognize the value of manual work and do not be ashamed of your fathers work.,, He proceeded ،،Peoples not policies make difference. China is a communist state and do not believe in opinions of other, however, China is in continuing progress. Greece is one of the most ancient empires in the world and announced their bankruptcy. It is peoples that govern progress not political systems or governments.,, He said ،،I compare between Egypt, Syria, and Iraq because we are all on the same ship, but Egypt jumped from the ship in the last moment.