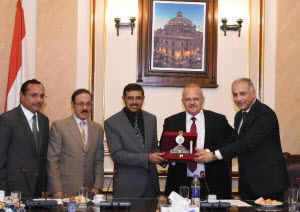 Elkhosht refers to the importance of the cooperation supporting the advancement of educational and research process. He pointed out that the development of educational process starts with exams and assessment methods. Cairo University President added that the university develops exam system by posing multiple choice questions and adding problem-solving questions that develops thinking skills for students and measures the ability to resorting to critical thinking instead of memorization and rote learning.

Elkhosht pointed out that Cairo University is keen on benefitting from different experiments in assessment systems including Saudi experiment of e-exam which reduces rates of cheating and increases rates of equal opportunities among students.

Prince Doctor Faisal bin Abdullah Elmishari Al Saud said that Cairo is the Capital of Arabs as it maintains both originality and distinctiveness. He enunciates his wish in achieving cooperation between the two sides, besides development, distinctiveness, and building strong competitive human cadres.

Elmishari added that assessment achieves development, accomplishment, confidence, and quality. It is effective in providing quality in educational process and making sure of achieving the goals of syllabuses, curriculum and educational programs. He refers to the importance of linking study goals to evaluation expressing his pleasure with the cooperation between National Center for Assessment at Saudi Arabia, Cairo University, and different higher education institutions in Egypt.

The Assistant Chief Minister of Higher Education Hossam Elmalahy refers to the increase in Saudi students in Egyptian Universities stressing the importance of cultural offices in supporting educational relations between Egypt and different world countries.