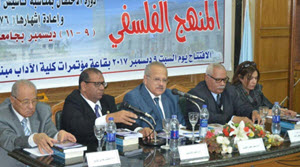 Philosophical Methodology conference is held at Faculty of Arts Cairo University. It is attended by the Head of Egyptian Philosophical Society Mahmoud Hamdi Zakzouk, the Dean of Faculty of Arts Ahmed Elsherbiny, the Chair of Philosophy Department Hoda Elkhouly, and some faculty professors and students. Elkhosht said in the conference that Cairo University Document for Culture and Enlightenment states in its introduction and principles that it is necessary to change student thinking methodologies and reasoning by changing exam systems to apply critical and analytical thinking skills in problem-solving. He added that university is graduating scientists, philosophers, or researchers as long as students are taught to think not memorize.