Abdelqader Shoheib in Cairo University Cultural Salon: ،Political Activity at University Should be Concerned with Public Affairs Not Partisan Activity, 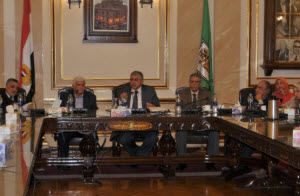 Journalist Abdelqader Shoheib said that Cairo University was not only consisting of auditoriums for receiving lectures in sixties, but it also was representing a full new life that adds many experiences and benefits to the sons and daughters of this generation. He added: ،Now we miss these activities and the university task has become confined to education only besides passing education stages to be certified and allowed job opportunity., Shoheib pointed out that education in universities during sixties depended on mind industry and imparting to students the ability to think and develop their problem-solving potentials and not just rote learning as happened hereafter.

Shoheib proceeded that this blend of education styles was natural and logical because the few number of students at that time, besides the distinctive elite of professors who had distinguished relations with students. He said that this kind relation between professor and student is no longer the same as the case now because student numbers are larger and professors are occupied with teaching in more than one university for the some circumstances especially economic ones.

Abdelqader Shoheib reviews 10 points for benefitting from the systems that were common at the sixties universities to avoid the mistakes witnessed by these universities as follows:

1-      Education is not enough for university but full life for students that serves the society where they live.

2-      University is concerned with the industry of critical mind.

3-      Dedication of professors to university work being provided with suitable income.

4-      Egypt is in need to increase different kinds of universities and ensuring the right to university education for all.

5-      University should be concerned with engaging in political activity by the concern in public affairs and not partisan activity.

6-      University plan should be developed for confronting religious extremism and takfiri thought which systematically invaded university.

7-      Universities are need to restoring kind and distinctive relations between students and professors to create healthy university life.

8-      University should be a model for disseminating values of good, beauty, citizenship, equality, accepting others, and mutual coexistence.

The seminar is run by Prof. Dr. Abdullah Eltattawy Cultural Advisor for Cairo University President who referred in his speech to the idea of university independence, educating minds, respecting youth visions, ideas and suggestions for the industry and development of aware critical mind skills of students able to discuss and ask questions. These are the most important goals of Cairo University Document for Culture and Enlightenment issued by Cairo University President Mohamed Osman Elkhosht as a framework to Cairo University. Eltattwy pointed out that third generation university shortens distances between students, and professor, and leaderships.