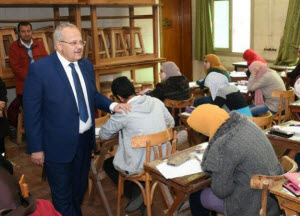 Cairo University students continue first term exams for the academic year 2017/2018. Exams are scheduled to end on January 18, 2018. Mid-year vacation starts on January 20, 2018, and continues for 15 days according to the time plan approved by Supreme Council of Universities.

Cairo University President Mohamed Osman Elkhosht said that a daily report is prepared by faculties on exam works including the number of attending students and cheating cases that are investigated at time. The report helps in following up any complaint regarding exams.

Elkhosht added that first term exams are quietly proceeding at faculties. No hindrances or problems were monitored in this regard except for some individual cheating cases that are remarkably reduced compared to previous years because of applying Bubble Sheet exam system. Bubble sheet is implemented with 55% of university exams. It achieves great success. Problem-solving question will be applied by the second term. It is aimed at imparting ideological, mental, and decision-making abilities to students. Problem-solving question is 5% of exam questions.