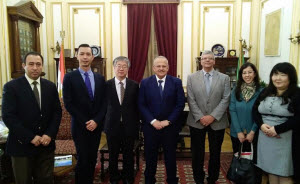 Elkhosht pointed out that Cairo University is concerned with launching joint scientific degrees in Bachelor and postgraduate studies stages to be granted by both Cairo University and Hiroshima University through cooperation protocol. These degrees are to be part of International Cairo University, which is being established at 6th of October City, essentially based on the idea of joint programs with foreign universities.