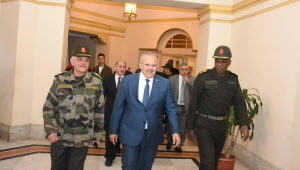 Elkhosht acclaims Egyptian Armed Forces, the role they performs to protect homeland and combat terrorism, and the sacrifices of its men to preserve Egyptian State. He assures that Egyptian people is always pride of Armed Forces and stands shoulder-to-shoulder to them in different circumstances.

Elkhosht enunciates the university appreciation of the role presented by Popular and Military Defense Forces through Military Education Administration at Cairo University for students including training and raising awareness to contribute to sowing the seeds of sense of belonging and loyalty to homeland values in them.