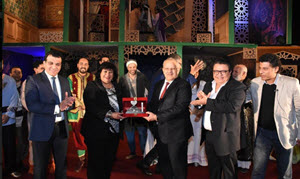 Elkhosht: ،Cairo University Seeks Renewing Artistic Movement and Theatrical Activity among Students and Art being One of Means of Combating Terrorism,

The theatrical show is directed by Adel Hassaan and performed by Mawlawi Arab Troupe for Sufi Heritage. It is presented within the framework of the cultural and artistic season activities at Cairo University for academic year 2017/2018 in cooperation with the Minister of Culture.

Elkhosht said ،We are in need to starting the cultural artistic season at Cairo University with untraditional show hosting Chinese Popular Art Troupe, at Grand Celebration Hall theater, which is attended by a great number of students who responded to artistic shows presented by the troupe., He added ،Today, the Grand Celebration Hall witnesses a wonderful artistic play, in cooperation with the Ministry of Culture, attended by the Minister of Culture Enas Abdel Dayem and a bunch of cultural leaders and theater artists.,

Elkhosht said that ،Art in general and theater in special are one of the means of combating terrorism and developing spiritual orientations in human. It resists extremism and helps cultural, educational, and artistic growth in recipients.,

Elkhosht announced that ،Grand Celebration Hall will witness ،Turn Yourself In, theatrical show and Cairo Symphonic Orchestra on the coming days, in addition to many ideological seminars and meetings and artistic shows within the cultural and artistic season at Cairo University., He illustrated that Cairo University enters a new stage of creativity and enlightenment.

The Forty Rules of Love, theatrical performance impressed the attendees including faculty members and students. The performance mainly relies on the novel authored by the Turkish writer Elif Şafak. The novel is based on projections on the idea of conspiracy and extremism in our contemporary age. The events of the novel take place after the fall of Abbasid Caliphate State at the hands of Mongols, however; the novel conveys messages emphasizing that our current age is only a little bit different from the age of 13th Century. The theatrical performance ،The Forty Rules of Love, reflects a human case that is highly pure as well as sheds light on ideas revolve around how human can live with love and tolerance instead of violence and hatred.