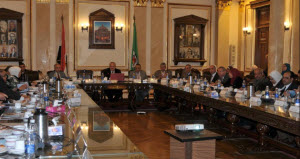 Cairo University Senate convenes its monthly meeting headed by Cairo University President Mohamed Othman Elkhosht on Wednesday, February 27, 2018. The senate meeting is initiated by enunciating its support for Armed Forces and Police in confronting terrorism by Sinai operation 2018. Cairo University President Mohamed Othman Elkhosht said that ،the operations conducted by the Armed Forces for abolishing terrorist epicenter in Sinai prove that the Egyptian Army is able to control manoeuvrs and military operations of any kind, pointing out the vital role that the Armed Forces plays to preserve the stability of Egypt and protect it. He said that ،Cairo University hospitals are fully prepared to cooperate with Armed Forces and Ministry of Health in medical help needed for that anti-terrorism campaign.,

Elkhosht added that ،Cairo University perform its role in combating extremist thought through raising awareness and holding seminars and lectures within cultural and artistic season activities at university or faculty level. The same is pursued through curriculum and raising awareness of students of the efforts exerted by the Armed Forces in combating terrorism.