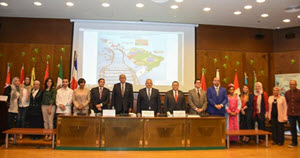 Elkhsoht: ،Cinema Presents to Spectators What Dozens of Books Could Not.. Art Being One of Vital Means of Communication between Peoples,

Elkhosht: ،Arab Culture Being Main Component of Spanish Culture and We Welcomes Students Coming from Latin America to Study at Cairo University,

Dean of Latin America Ambassadors: ،Egypt Being Cradle of Civilization for More than 4, 000 Years .. Egypt Being Country Where We Feel at Peace,

Cairo University President Mohamed Othman Elkhosht said that ،art is a mutual language between peoples; whether cinema, theater, or songs., He added that ،art is a global language as it represents mutual emotions between peoples for it influences minds and presents crucial artistic, cultural, and political message., He pointed out that ،minds cannot open except with liberating emotions and the way to emotions is art.,

This word was delivered in the conclusion of Artistic Festival for Latin Cinema organized by Spanish Department, Faculty of Arts, Cairo University at New Central Library. The word is attended by ambassadors and states representatives of Paraguay, Peru, Guatemala, Bolivia, Venezuela, Cuba, Panama, Mexico, Equatorial Guinea, and Dominican Republic, Chair of Spanish Department at Faculty of Arts Abeer Abdelsalam, and Professors of department and students.

Elkhosht added that Cairo University owns a complete system for holding cultural activities and high arts for students being based on diversity and accepting of others. The system aims at developing minds and liberating emotion from the one-pattern art to approximate other civilizations as art is one of the important means of communication between peoples. Elkhosht pointed out that Artistic Festival for Latin Cinema at Cairo University is one of the vital festivals in the framework of Cairo University policy to get closed doors and minds opened to other cultures.

Elkhosht proceeds that cinema presents to spectators what dozens of books could not. He pointed out that Spanish language is one of the most important languages in the world regarding the level of culture, dissemination, and influence on different states. It is a language for communication between peoples and openness to cultures of these peoples.

Elkhosht said that extremism and terrorism which the world suffers from emanate from closed minds and suppressed emotions that should be liberated by art. He added that Egypt is a country that is open to the cultures of many states including the culture of Latin America which is one of the nearest peoples to cultural Egypt. He pointed out that Arab culture is a main component of Spanish culture as there are 10 presidents of Latin America have Arab origins as well as Arab delegations disseminated in states of Latin America.