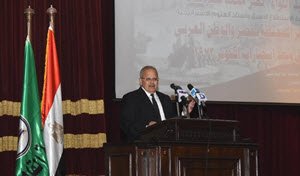 Cairo University President illustrated that preparation for October war and policies represented an image of exceptional Egyptian thinking. Those exceptional cases are inherent in Egypt since ancient periods such as facing tatar war and hyksos war. Elkhosht said that those exceptional moments should be transformed into constant moments.

Elkhosht pointed out that Egyptian thinking methods should be changed and moments of rational thinking should be constant. He added that current circumstances should be perceived in the light of October War. We are facing a fierce campaign of evildoers who seeks to unsettle Egyptian National State. He said that Egypt is not in loss after January 25 Revolution as Egyptian people and army were in solidarity which kept Egypt away from some forces that were targeting the unsettlement of National State.

Cairo University President added that keeping all Arab countries safe is a crucial thing for the stability, safety and security of the region. He assures the importance of standing against exterior conspiracies and avoid deceptive slogans.

Elkhosht concludes his word saying ،،My hopes for this generation of students is to achieve better record so that Egypt become stronger than before.,,

Dr. Nasr Salem delivers an extended lecture entitled ،،The Dangers Surrounding Egypt and Arab World before and after October Victory 1973.,, The lecture handles the nature of strategic plan of October War and the victories achieved by Egyptian Army are studied in military academies. The lecture illustrates the success factors of National Army in restoring land and promoting the dignity of homeland and citizen.