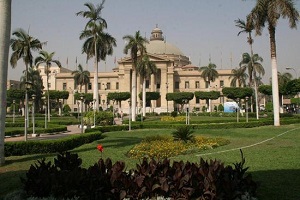 Al-Khosht won because of his works in Theology and the relation between civil community and the state, as well as his writings about rebuilding the Egyptian state in the last three years. Al-khost won international publication award last year for a research published in Deutsch that was added to publications of Kassel University. It is entitled  Global Citizen and Cosmic Tendency in Enlightenment Age . This research was lauded by Herman Herder, the German philosopher, for mixing between delving into Islamic heritage and Western thought as well as basing his works on rational approach. Dr. Al-Khosht has presented a new theory in his book  Development of Religions . He defended faith issues through rational and philosophical approach in his book  Major Dogmas between Puzzled Philosophers and Prophets Dogmas . He rewrote Hadith Science in a contemporary formula in a book, entitled  Clues of Hadith Science . He also rewrote interpretation of Shari a attitude towards women s issues since the eighties of the twentieth century concerning women s right to take over judiciary, Fatwa and testimony as well as equality between women and men in political and civil rights, etc…