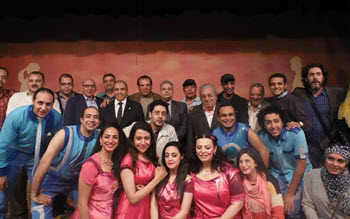 Professor Gaber Nassar, President of Cairo University, has issued a decree of earmarking 50, 000 EGPs for boosting the short stage show festival which is held on the level of the university and organized by Arts Administration at Youth Care, Cairo University on theaters inside and outside the university. The activities of the festival will continue until December 21, 2014. It is scheduled the first place winning team will be escalated to represent Cairo University in Ebdaa 3 Competition which is organized by Ministry of Youth starting on December 25. Shields will be delivered to the faculties that win the first five places in the short stage show festival as well as earmarking monetary prizes to students.