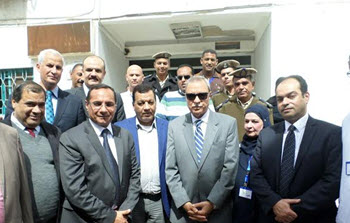 The medical convoy conducted medical examinations and offered therapy for free to about 1200 citizens at Qena Public Hospital, Qous and Qift Hospitals, as the convoy brought along a large amount of different medications. The human convoy physicians conducted 15 different surgeries at Qena Public Hospital, and some cases were transformed to Kasr Al Ainy Hospital, and held a work shop for Physiotherapists at Qena Hospitals. Whereas the veterinary convoy offered its services to the villages of Dishna, Qift and Qous counties, besides; making the people aware of the importance of livestock at these areas.